Diseases of the Locomotor System 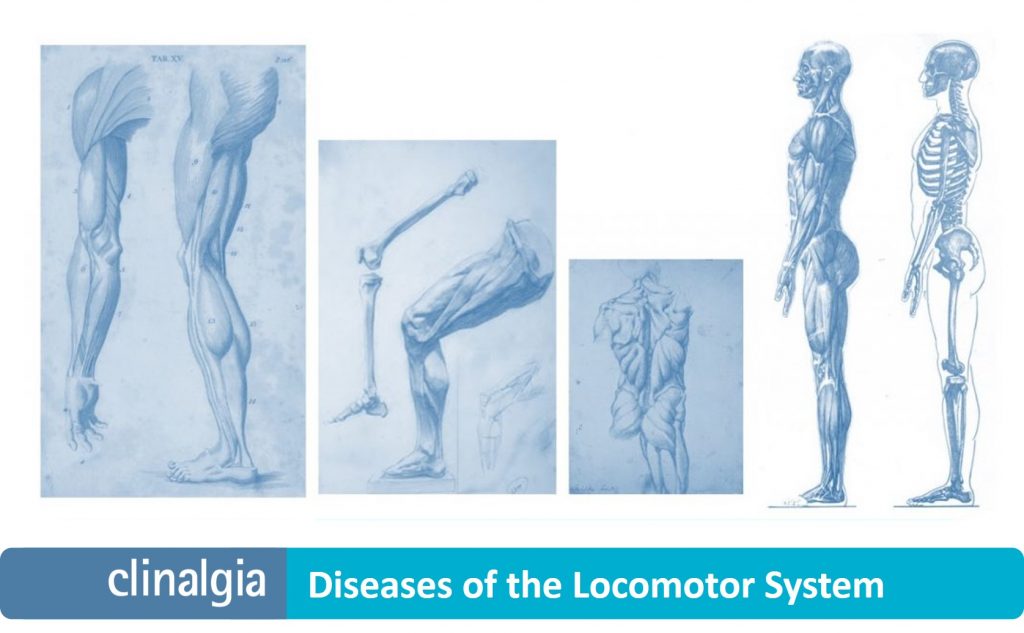 The most common diseases of the locomotor system are:

It is the inflammation of one or more joints.

It usually appears abruptly and is characterized by pain and stiffness.

The stiffness is promoted because the musculature tightens, setting a defensive position to prevent the joint from mobilizing.

This protective muscle stiffness can be the cause of myofascial pain, so the two pains overlap and coexist.

It is very important to determine that the arthritis does not have an infectious or inflammatory cause related to a general disease, as occurs in rheumatoid arthritis or psoriatic arthritis, of an autoimmune nature.

Sometimes the muscular chains, after years of tension, pull on the joints, inflaming them as well as the tendons and associated ligaments.

The pain spreads through these structures and becomes chronic, becoming refractory to the usual treatments.

It is a degenerative deterioration of the joints, painful or not.

Cartilage deteriorates, generally due to mechanical overload, and no longer fulfills its shock-absorbing function.

The deterioration of the cartilage promotes friction and wear between the bone surfaces, which can become inflamed and start to hurt (arthritis).

In this disease of the locomotor system, the wear and tear deforms the joints, whose mobility is limited and they become unstable.

This instability places an overload on the muscles, tendons and ligaments, whose “extra work” to compensate can also cause pain.

Obviously, age is a factor favoring osteoarthritis, as well as overweight, but there are also diseases that affect cartilage, accelerating its deterioration.

Tendons are the structures that connect the muscles to the bones.

They transmit the muscular traction force to the bones so that movements are produced.

When tendons become inflamed we speak of tendinitis.

The most frequent cause is mechanical overload due to repeated use.

For example, the continuous repetition of certain movements will give rise to the tension of the muscles of the forearm, inflaming its tendons of insertion on the elbow and generating the so called “tennis elbow” for being frequent in this sport.

A further step will be the inflammation extended to the part of the bone where the tendon inserts.

It is quite painful and is called periostitis.

Evidently the age is also a factor associated to the development of tendinitis, because the fibrosis, the shortenings and the muscular tensions are aggravated until compromising the tendons of those that traction.

The bursas are structures that are arranged, like cushions, between the bony prominences and the tendons or muscles.

Their function is to avoid direct friction and to favor the sliding between these bony edges and other structures of the musculoskeletal system.

They are constituted by lax connective tissue, very resistant and adaptable, but that can become inflamed when there is a mechanical overload.

Bursitis can be caused by direct trauma or by a general medical process, such as certain inflammatory, autoimmune or infectious conditions.

This pathology of the locomotor system is frequent in athletes and is usually aggravated by overweight.

It is also very sensitive to the environment around us and to our emotional state.

Apart from certain infectious, inflammatory or autoimmune diseases, over the years, mechanical overloads can make our biomechanical system vulnerable, causing problems due to decompensation.

Most commonly, the pain we perceive is mixed, since muscular tractions and shortenings become painful and condition the stability of other structures such as tendons, ligaments, bursae, periosteum and joints, which also become inflamed, extending and chronifying the pain.

This justifies that an initially very limited pain spreads and becomes complicated, affecting the individual in general, as has been described in fibromyalgia or in chronic extended low back pain.