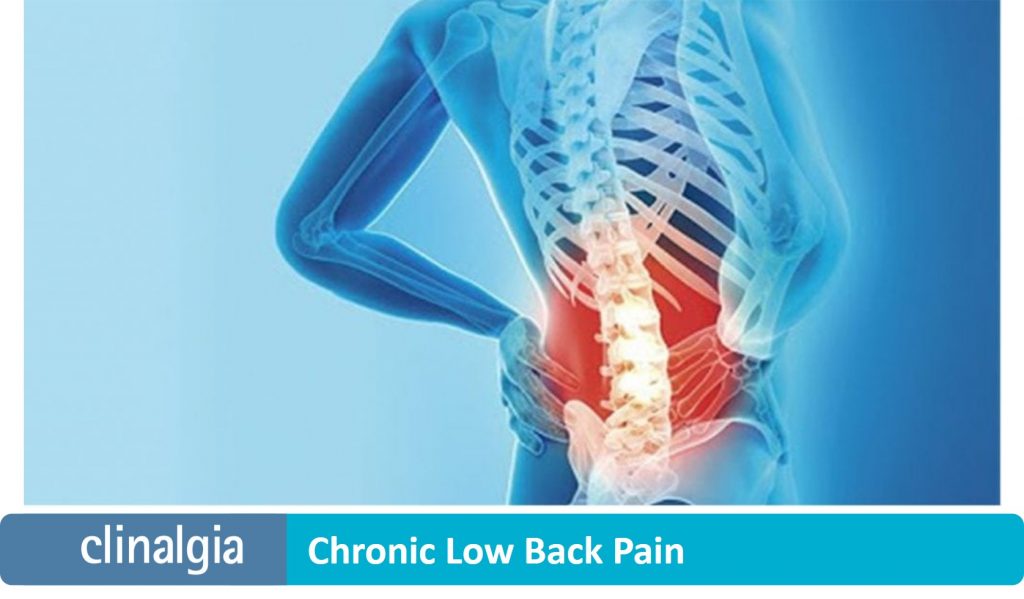 Chronic low back pain is very common, affecting around 80% of the population1.

What is low back pain?

It is possibly the most common pain in mankind, and is one of the most common causes of consultation, both in general medicine and in specialized clinics, with the cost and social impact that this entails.2

Low back pain is pain that originates in the lower back and waist and can be of both acute and chronic evolution.

In our case, we are going to focus on chronic low back pain.

What causes chronic low back pain?

Although it can be caused by muscle spasm or muscle and ligament strain.

In most cases, it is non-specific chronic low back pain, which is that whose cause is not clear.

It is responsible for 11.4% of all temporary disability in Spain,3 with a cost of some 66 million euros.4

Most frequently, when low back pain is chronic, it spreads, making it difficult to identify its main origin.

Knowing which structure is worse is essential to organize an effective treatment.

In many cases, low back pain does not correlate with the results of MRI scans.

Sometimes the pain is reflected, and the painful area does not necessarily coincide with old damage seen in studies with X-rays, MRI scans, CT scans, etc.

Despite advances in techniques such as Magnetic Resonance Imaging, in most cases, the image does not correlate with the pain. “You can’t see the pain, you have to explore it”.

Scientific evidence on chronic low back and neck pain

It has been shown in several studies that even when anatomical anomalies, such as disc protrusions, are observed, they may not correspond to the pain and functional limitation suffered.

In 1994, a study was carried out in which two independent radiologists performed MRI scans on 98 people without pain, who nevertheless had obvious spinal impairments.

Only 36% of the people without pain had a “perfect spine”.5

In another similar work, MRI scans were performed on 63 volunteers without cervical pain, and up to 19% had abnormalities, such as protrusions, herniations or foraminal stenosis.6

In this scenario, some authors consider that skeletal factors may not be the most important determinant, assuming that a genetic constitution would be more important.7

Low back pain with central sensitization

We know that in certain patients with chronic pain, such as those with low back pain, neuroinflammatory phenomena and central sensitization should be considered.

These are cases in which the processing of the painful signal in the central nervous system causes it to be experienced in an amplified manner… “I have the same pain as my neighbor, but it hurts me more”, because my nervous system interprets it that way.8

Based on this research, experts advise caution when planning invasive treatments, such as surgery.

How to treat chronic low back pain?

They recommend a multidisciplinary treatment plan, staggering the interventions, starting with the least aggressive, such as paravertebral ozone therapy.

A 2006 study revealed this type of alteration in the processing of pain, so that under the same level of painful stimulus (especially pressure), patients with low back pain showed greater neuronal activation than controls.

Functional nuclear magnetic resonance imaging showed a lower cerebral perfusion in the periaqueductal gray matter, one of the key areas in the management of the inhibitory mechanisms.9