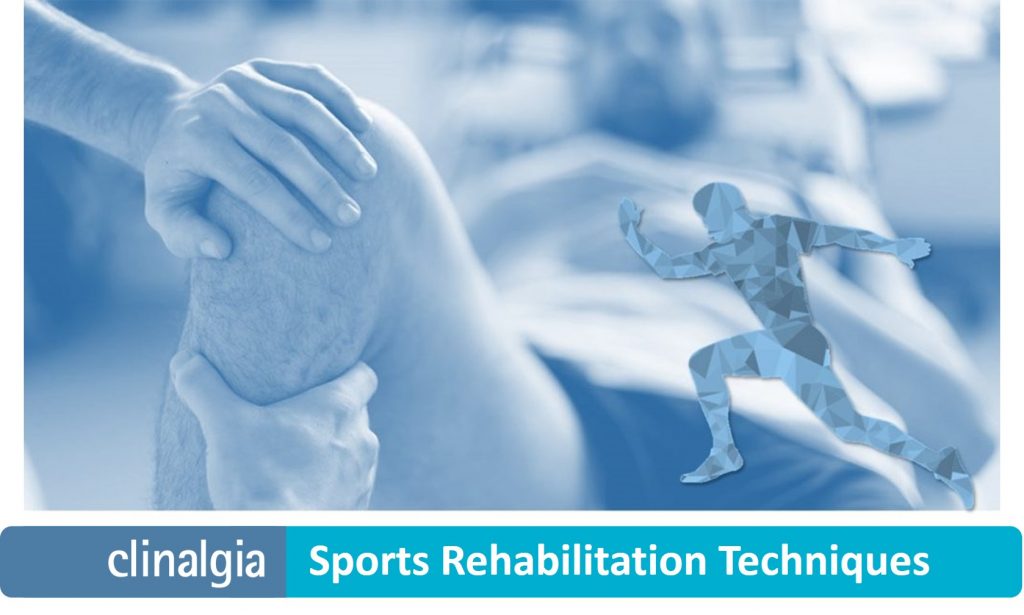 Among the most common sports rehabilitation techniques for the treatment and prevention of injuries are:

The first of the sports rehabilitation techniques is sports physiotherapy.

It is aimed at both the treatment and prevention of sports injuries.

The physiotherapist is an indispensable support in the identification and detection of tight bands and myofascial trigger points to be treated with infiltrative therapies.

In our protocols he is crucial in pre- and post-infiltrative treatment.

In addition, the sports physiotherapist studies the biomechanics of each patient and detects the limitations and deviations of the same, facilitating and creating tables of stretching and strengthening exercises that the athlete will insert into their preparation plans.

Electrotherapy
This technique produces electrical stimulation of both nerve endings and muscle fibres.

There are different types of sports rehabilitation based on electrotherapy.

Ultrasound
The application of ultrasound promotes vascularisation in deep tissues and is used for the treatment of tendonitis, myositis, meniscal tears, etc.

Electroacupuncture
Electroacupuncture is a minimally invasive sports rehabilitation technique that uses needles to transmit the therapeutic effects of electrical stimulation to deeper structures.

It is used for Achilles tendonitis, plantar fasciitis or tennis elbow.

Ozone therapy infiltrated at high concentrations and other manual techniques are a good complement.

The lymphatic system is made up of a number of vessels and lymph nodes through which lymph circulates, which is a filtrate of intercellular fluid.

This filtrate may contain microorganisms, fatty molecules, and other detritus, which are destroyed by lymphocytes in the lymphatic system’s enlargements, which are the lymph nodes.

The basis of lymphatic drainage is the activation of lymphatic circulation by means of massages that follow the course of the network of vessels, stimulating their circulatory and depurative activity and improving the function of the immune system.

This is the exposure of all or part of the body to unusually low temperatures.

In principle, the cold will induce vasoconstriction, with subsequent reactive vasodilation, favouring blood supply and all the benefits that this entails.

In effect, a process of ischaemia/reperfusion is set in motion, which is a model of “cellular training” to periods of reduced oxygen supply, which, like ozone therapy, would activate antioxidant defences.

Studies have been published on migraines, and osteoarthritic pain [1], [2].

In general, we use sports supplementation as an anti-inflammatory and ergogenic aid to help muscular strength and endurance.

Numerous supplements have been proposed, generally with limited levels of credence, inviting “trial and error” on a patient-by-patient basis.

Creatine is one of the most widely used supplements, and one of those with the highest level of evidence.

Omega-3 supplementation has recently been proposed as an ergogenic aid for athletes.

It is purported for its anti-inflammatory properties and for reducing oxygen cost during exercise.[4] Omega-3 supplementation may also help to improve exercise performance.

Protein-rich diets and protein supplements appear to be safe in healthy patients.

Protein supplementation in endurance competition appears to be beneficial.

The source of protein and timing of protein intake appear to be less important. [5]

In addition, it is essential for lymphocyte proliferation and would enhance immunity in sick patients.

Although there is not much data on its usefulness in athletes, it is accepted that it would be effective if the intensity of the sporting activity is high.[6]

L-Arginine is the main precursor of NO, and L-citrulline can be converted to L-arginine[8].

Leucine, isoleucine and valine are branched-chain amino acids that make up about one-third of muscle protein.

Converts to nitrite, which in turn converts to nitric oxide under conditions of low oxygen availability, with beneficial roles in vascular and metabolic control, improving exercise tolerance and performance.

Several studies have shown an improvement in exercise performance in submaximal endurance activities.

Its intake has been shown to increase blood levels of nitric oxide, thereby promoting vasodilation and oxygen delivery to the muscular system.